Film Spring Open Foundation offers many opportunities of career development for filmmakers and students of arts/film schools and aims to support and promote the audiovisual market in Poland and increase its competitiveness. 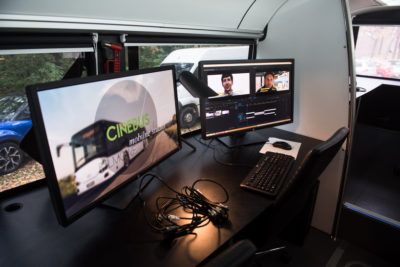 Our workshops are based on modern approach to film making and venturing into the future in the audio-visual sector. Not only we aim to follow and teach the newest trends on the market but more importantly, we research and introduce new solutions in practice. The best example of such activity is designing, building and introducing our Cinebus – a mobile film studio, which is a new and unique tool of film production on the Polish market.

Our approach and mission has led to the point where we are becoming an avant-garde of the new Film Production Model, which for the second year in a row will be the main subject of our annual 10-day Film Spring Workshop.

For those of you who would like to become more familiar with the concept we will publish a series of excerpts from Mr Sławomir Idziak’s essay entitled “How to make films cheaper and better”. Enjoy the part 1.

HOW TO MAKE FILMS CHEAPER AND BETTER.

The new Film Production Model – an outline of the concept that we are implementing at the Film Spring Open Workshop. By Slawomir Idziak

The film production system established over the years, has not changed or changed slightly in relation to the radically transformed technology. The world is shaken by crises, industrial production is steered by cost optimisation, governments are introducing budget cuts. Meanwhile, the world of film does not change much. Technological revolution has had little or no impact on the film production system, even though it should have increased its efficiency.

In modern industry, there are three rules that are absent or near-absent in film production:

It is worth considering why this happens, what are the reasons for the lack of modernization and what should change. […]

In short, the new system will have the following features:

We want to apply the proposed model to contemporary small-scale films and films made by young debuting directors. The new model is aimed at producing more films for less money, and will therefore offer more debutants the opportunity to start a career, and institutions that are appointed to fund film creation will propose and test a model of economic use of available resources. We believe that more films can be made as part of the same measures, allowing more newcomers to start a career.

We should start the analysis of the state of affairs from the origins.

The leader on the global movie market is the film industry in the United States. It completely dominates the world markets, generating the highest profits. Every student at the film school dreams of making a career in Hollywood. The copying of American films is widespread worldwide. At the same time, we are copying American production standards. Using studio production supporting software we forget that it was developed on the basis of a specific system, the changes to which are blocked by very strong American trade unions. Moreover, studio cinematography is still very profitable, and therefore the urge for change is weak. This is not entirely true, because American producers have long been looking for savings by simply moving away from Hollywood (run-away productions) and, for example, more films, where action takes place in New York City are actually made in Toronto, because it is cheaper there. It is an open secret that an American studio film made in Europe would consume 40% less funds than in Los Angeles. […]

It does not mean that the situation is better in Europe, and it does not just to American films only:

The conclusion is not that in Poland filmmakers earn drastically less money. It does not mean either that the system of production and spending money on films in Poland is good. This is simply a lege artis (because the legislation in these countries is different) exercise in throwing money out of the window. […]

The film production system has developed over the years and has been preserved for years without cleansing itself, being immune to necessary organizational changes, which should be forced by the technological change. Another reason lies also in our common vice. We simply do not want to change our comfortable and proven habits when embracing new products, especially if such habits seem to benefit us. We do not notice that the changing world demands a revision of our (often profound) patterns and behaviours.