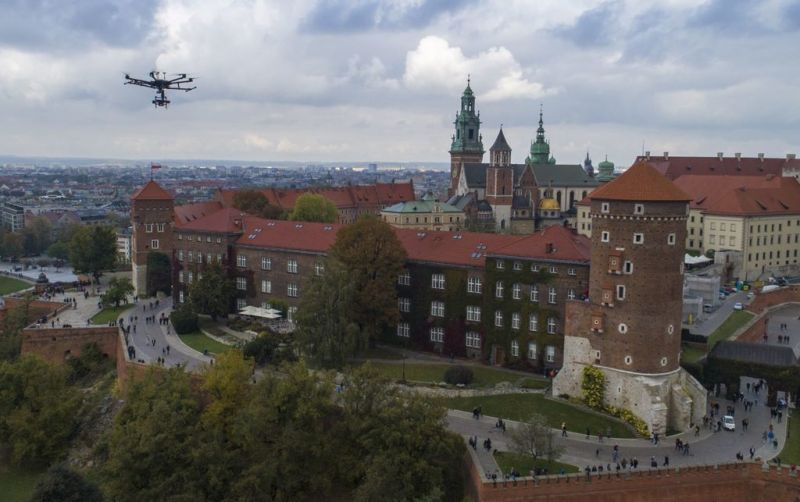 The aim of the three-day “Wawel Hackathon” was to create an educational product combining the world of film with modern VR and AR technologies. Franciszek Matysik’s project entitled “Secrets of Wawel” made in the form of a film in VR 180 3D technology won the competition.

The three-day hackathon was planned to present the concept of a modern educational form that would encourage young people to learn about the secrets of the Wawel Royal Castle. By opting for modern solutions, organic interest of the younger audience is aroused, which was the intention of the originators of the cooperation between the Film Spring Open Workshop and the Wawel Royal Castle.

The last coronation of the king, which took place at Wawel was selected as the subject of the work. It was the coronation of Augustus III. The choice of this event had its historical background, as the real royal insignia were then hidden from the king, and the coronation was made on specially made substitutes. This became the script for the movie, and VR 180 3D was adopted as its format.

“To present the story, we chose the most popular format on VR goggles, i.e. 180 VR 3D. Viewing such image via special glasses allows you to see the depth and creates an excellent effect for presenting characters, objects and castle rooms,” says Franciszek Matysik, project leader and creator.

The VR180 3D format shows the image in stereoscopy – it is recorded by two cameras spaced apart from each other. This treatment is posed to discern the distances between objects and increase the depth of the image. However, this causes great difficulty in image modification, especially when embedding graphics and 3D models. The technical difficulties were resolved by the next members of the group. The group was joined by Agata Nawrocka, a visual effects specialist, who performed an analysis of the movement of the camera placed on the drone and stabilizer, thanks to which it was possible to track the object and work with 3D models. 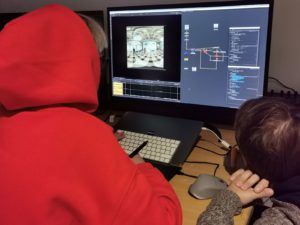 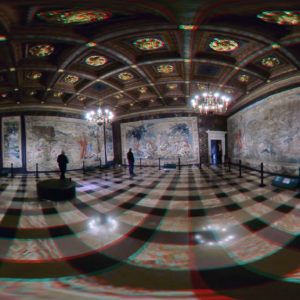 Another member of the team, who dealt with modeling and preparation of scenes combining 3D models with the image recorded in stereoscopy, was Marcin Kunach, a gaming specialist in Unreal Engine. He made it possible to place the model in a stereoscopic image in the appropriate perspective. This model was, of course, the crown of Augustus III.

Łukasz Ciechanowski, who showed Wawel from a well-known and recognizable perspective, was responsible for the opening shot taken from the drone.

To introduce the atmosphere of the castle, the team used fragments of music written especially for the main character of the film, Augustus III, ie “The Great Holy Mass h-mol” by J.S. Bach, as well as recorded sounds of the beating Sigismund Bell.

The entire film, made in a short time, was prepared in the format for VR glasses and in anaglyph format, which allowed to see the 3D effect, not only in VR goggles, but also on a screen displaying the image from the projector for the entire jury.

“The Film Spring Open Workshop have been a great opportunity to present the most courageous ideas. Thanks to the fact that people with open minds – open to cooperation, met in one place, it was possible to complete such an advanced project in just three days” – adds Franciszek Matysik, VR producer.
The participants’ ambitious projects are the result of lectures and exercises performed at Film Spring Open. Probably due to Sławomir Idziak, who in the opening lecture encouraged to achieve the highest and most difficult goals in an ecologically effective way.
The author of the text and photos: Franciszek Matysik
Udostępnij na:
Facebook
Twitter
LinkedIn