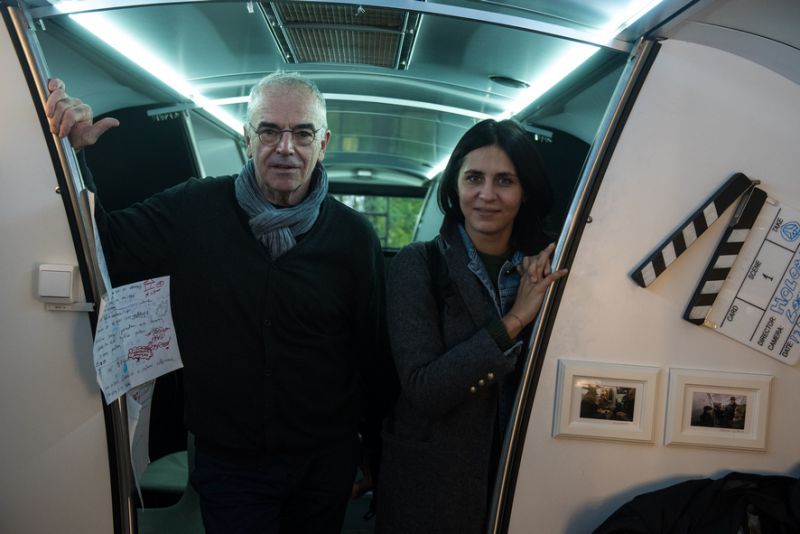 Jagoda Szelc met with the participants of the workshop after the screening of her second feature film “Monument”, which brought her the Special Jury Award at the 43rd Polish Film Festival in Gdynia for “an innovative film narration and consistent following her own creative path.” During the previous edition of this most important Polish film festival Jagoda’s first feature Tower. A Bright day has won Best Debut and Best Screenplay.

Monument is a diploma film of the students of the Acting Department of the Film School in Lodz (PWSFTviT), an initiative which enables the fourth year students to complete a full-length feature film in cooperation between all the departments. Such a project has a very small budget and is very challenging to young filmmakers.

Surely rightly then, Jagoda described herself as an expert on nano-budgets. “The discipline concerning sticking to the budget guarantees the final success – making something we intended, instead of making something that came out this way by accident.”

During the lecture she focused on film production from the director’s point of view. “Starting from the position that there are other people who should be responsible for the way the film is being produced is naive. You, as the director have a great influence on the way film is being made.”

Talking about the start of one’s professional path as a filmmaker, the director claimed: “If you think that you are determined to make a film you should multiply this by two and then add something extra”

Jagoda devoted a big part of her lecture to the logistics of a film set and specifically to film locations.  Regarding the budget she underlined that absolutely every expense should be considered important as even the small ones sum up to the significant amount at the end.

Therefore choosing the film location is extremely important as its geographical location, renting fees, availability and the stenographic opportunities are the key factors influencing both the budget and the director’s vision.

She indicated the importance of team working and the right choice of people to work with. The young director described the consecutive stages of building the team, particularly choosing the people, building the relationship or working on set.

People must know that they have been chosen specially to work on a given project. Only then they will not have the need to prove constantly their competence and will be able to concentrate on their tasks.

As everywhere else, communication is the key. Not only what we say matters but also how we say it. The language should express mutual respect and the commands be clear and precise. Mistakes should be talked about but in a respectful and understanding way.

Working with a nano-budget requires making savings everywhere but Jagoda advises to film two/three scenes without calculating the funds in order to make the viewer believe in the world that is being created. “Understand your scenes, what they are about and then choose the right ones to make them for real, no half-measures.”

Some rules that Jagoda presented during the lecture, like the presence of an editor on the set, or a very careful pre-producion are in parallel with the rules of the new film production model advocated by our foundation and described by Slawomir Idziak in his essay How to make films cheaper and better.

Jagoda Szelc appears as a very conscious and experienced artist, who think of the work of the filmmaker both holistically and in very detailed way, which will undoubtedly allow her to take up masterful positions in the field of audiovisual arts. We wish all Filmspringers to find their creative way and hope this was a great source of inspiration.