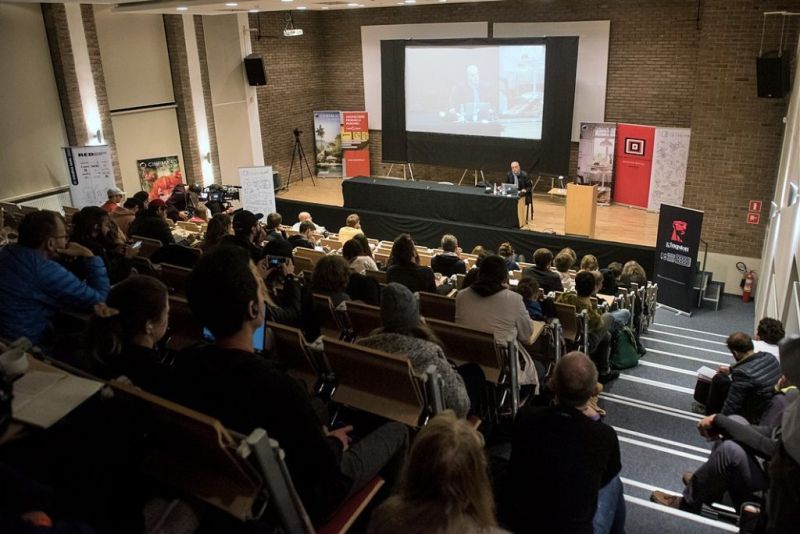 During the Film Spring Open Workshop Prof. Sławomir Idziak played a threefold role as the tutor of the New production model group, a lecturer and the Program Director. And just as immensely diverse and directed to a wide range of recipients is the workshop’s educational program, so the lecture of Sławomir Idziak can be perceived at many levels.

The subject of the lecture was visual dramaturgy – the language of storytelling in an audiovisual work – including light, color, perspective, composition and the choreography of camera movement. However, as it turned out, not only the cinematographers or directors found it extremely interesting. Visual dramaturgy, although it refers to the image, can be a perfect tool for building emotional relationship with a viewer and composing the appropriate structure of any work, be it literary, theatrical, choreographic or film. The more valuable, because very universal, was Prof. Idziak’s guidance.

“When we make an audiovisual work, we fight for the soul of our viewer. Emotions are our product. If there is no emotional spark between the screen and the audience, the reality that we were building does not exist. People leave the cinema or switch the channel.” The speaker begun the lecture with a firm statement and definitely won the souls of the listeners.

Then he presented several strategies to facilitate building a relationship with a viewer. The first of them was targeting.

According to the Professor, to understand the audience a filmmaker must imagine a viewer who has a great choice of films to watch. Then one must realize what is behind such a choice. A viewer’s emotional state affects the genre they choose. There are also lovers of a particular genre who have a broad knowledge of its narrative language, which should be taken into account, because when we do not meet their expectations, they will give up on our film.

“The strategy of imagining a specialist cinemagoer and, above all, defining what genre we are making is crucial. We can make inter-genre films, we can transfer stylistic tricks from one genre to another and this enriches and refreshes the storytelling, but to completely disregard the genre is a mistake. We want something, but we do not want everything. Targeting the viewer is extremely important. “

The following remarks also concerned a relationship with a potential cinemagoer. „I often have impression that young artists think that someone is waiting for their film. Much better strategy is to choose a viewer who does not want you. This strategy will allow you to build tools and ways to attract this viewer faster and stronger.”

„The beginning of the movie determines whether we like it or not. […] Love at first sight is still valid. People rate things instantly”stated the Professor.

He presented the principle of the first act: “from indifference to emotional involvement” based mainly on making the viewer identify with the main character, especially in the psychological drama. This strategy should be performed both in the literary and the visual layer of the work.

“If we open in a strong, unusual way, it obviously does not guarantee that someone will fall in love with our film, but it opens the viewer up in some way, because the image and sound reach straight our subconscious. The literary narrative needs our active intellectual participation, while the visuals simply attacks us. We often see the strategy in which the first scene is not related to the script, but is a very strong visual or musical attack, because it allows the viewer to open in the cinema.”

Once the viewer is emotionally involved with the main character, the exaggerated visual attractions become exhausting, warned the lecturer. But thanks to the strong visual opening, the filmmaker can show the world in his own, distinctive way. The beginning of the film should be the author’s stamp. “The difference is not in what we are talking about, but how we tell. Our role is to do it like nobody has ever done it before. “

Then the participants could enjoy an in-depth analysis of the opening scenes of “Three Colors. Blue “directed by Krzysztof Kieślowski. The DOP for the film noted that when the film was made 25 years ago, its filming was very innovative.

“We should look at the technology as a tool that will help us change the way of storytelling and make it more original,” emphasized the thought that guided the entire Film Spring Open Workshop.

Speaking about the visual side of the film, he advised: “Question all the screenwriter’s choices. Writers are sensitive to the word, but not to the image. Often moving the same scene to a different, more interesting place brings new opportunities. Typicality kills.”

“The world of the film is our world, we build it from the very beginning, the more we will think of every element of it, the more interesting will be our conclusions. There are no invalid factors in this universe”, the cinematographer advised when discussing the role of the set design. He noticed that the place of living of the characters often tells about them more than just acting.

He argued that the script is only a starting point for a film and the mistake of the novices is too strong attachment to it. “Let’s be open to change” he asked his listeners.

Talking about the total transformation of the “Three Colours. Blue” during its editing, he left listeners with a beautiful thought regarding the basic rule of artistic creation: „we are not the owners of what we create, we are just accoucheurs, especially in the film. […] A true work of art has its own life and our role is to discover it. “