From words to image

We are announcing recruitment for an online course with director Mateusz Rakowicz: “FROM WORDS TO IMAGE, or why it is worth drawing a script to achieve the perfect effect on screen”.

The instructor will talk about the key importance of communication between the director and the heads of other departments during conceptual work during intensive pre-production of the film.

The storyboard will be treated here as one of the tools to facilitate the transfer of the director’s and cinematographer’s concept to the other members of the crew.

During the meetings, examples of storyboards and drawings from many famous films will be presented, as well as comparisons of drawing stages with the final effect and an analysis of differences or similarities. 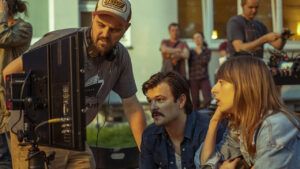 Mateusz Rakowicz will also conduct a case study of fragments from his film “Najmro”. Using this example he will talk about the entire process of making a scene: from writing the script, through the storyboard, to the final effect.

The current course is an introduction to the topic of using storyboards on the way “from words to film”.

Already in the new year, we will invite participants to sign up for the second part – for practical classes with Mateusz Rakowicz, allowing you to both find your own technique of sketching simple storyboards and consult your attempts to translate a film idea into images, but also to communicate with the team during pre-production as well as on set.

The classes are aimed primarily at directors who want to find a simple way to previsualize their ideas, as well as an effective method of communication on the set. 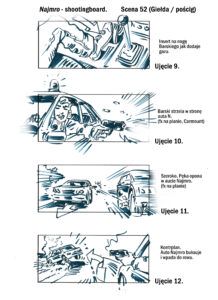 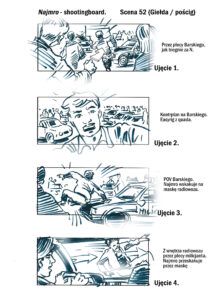 From the artist’s private archive

For more information ant to sign up look HERE

A graduate of the Warsaw Academy of Fine Arts and the Andrzej Wajda Film School. He drew storyboards for films by, among others: Agnieszka Holland and Kasia Adamik, Juliusz Machulski, Władysław Pasikowski, John Daly, Łukasz Barczyk and Greg Zgliński. He drew over 500 commercials.

Director of original short films, including the award-winning “Lighthouse Keeper” and “Romantika”. He is also the author of commercials and music videos (among others for Kamil Bednarek, Afromental, Ania Dąbrowska and Pezet). Winner of the Fryderyk Award for directing the music video “Bang Bang” to Ania Dąbrowska’s song. 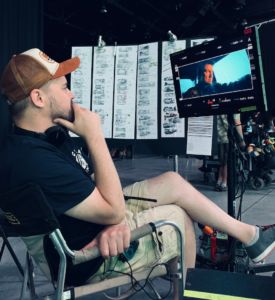 From the artist’s private archive

Co-funded by the Ministry of Culture National and Heritage of the Republic of Poland from the Culture Promotion Fund, CO-FINANCED BY THE STATE BUDGET