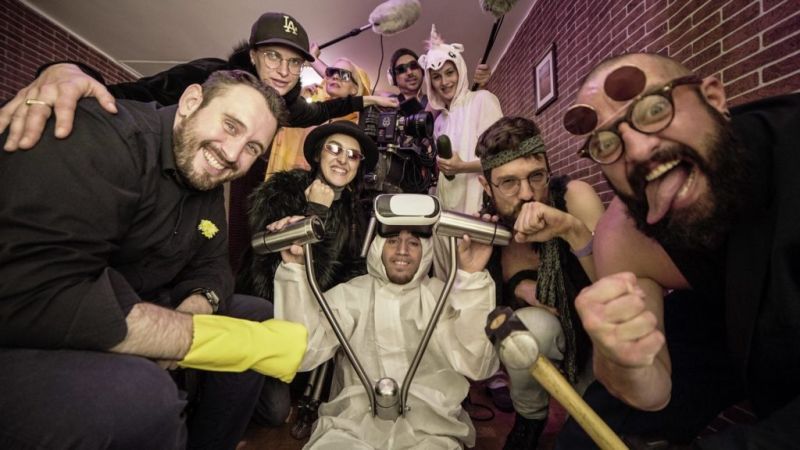 We invite you to join the Interactive Narration Group 2021 once again led by Florent Pallares, a PhD graduate in film and audiovisual studies, audiovisual teacher at the University of Perpignan and the creator with Barbara Jonak (Kurzaj) of Red Eyes Cool, an international group of filmmakers.

Participants in the Interactive Narration Group can work on the project of their choice and/or join the projects “Let’s change the world” and/or “Super Tramp.

“Let’s change the world” is an interactive documentary project about people who are trying to change the world on their own scale. The public will be able to meet them by selecting them by country or theme. Part of this project was started in France, at the University of Perpignan by the students of the professional license: “Information professions: journalism and press” course “Photojournalism, digital media and audiovisual images”.

The first season of Let’s change the world will be launched at Film Spring Open Air in October 2021 in Krakow. It will be accessible for free on all social networks.

It is open to all people who would like to help in the different stages of creation and/or make their own documentary. These should be less than 16 minutes long.

Another aspect of the project will be to try to create the most ecological audiovisual production possible. We have created the making-of “Make an interactive and ecological film in pandemic times” to give some examples.

You can find this making of and some documentaries made by the students of the University of Perpignan Via Domitia HERE.

It’s an interactive fiction about an international reality television program called “Super Tramp”. The viewers have the ability to choose their own path through a story with a series multiple-choice questions, in the spirit of some movie as “Black Mirror: Bandersnatch” by David Slade. The subject is a competition between some homeless chosen in the world in order to change their life, as the audience want. The audience can choose for example some homeless people from France, Mexico and Poland and then, choose what each homeless can become for example an artist, a politician, a sportsperson etc.

A part of this project will be done also at Cabestany in France and Guanajuato/Leon in Mexico. A making of of the starting point of the project in Mexico is available HERE.

Each person interested by this project, is very welcome.

During Film Spring Open Workshop, the Interactive Narration Group want to work, inspire and get inspiration in the spirit of “artistic residency”. The goal is to make a complete interactive movie in the next two years. This project is open to all individual filmmakers who want to help in the different steps of creation or to the creative groups who want to make their own scenes in this interactive story. You can help for one day, some days or the entire length of the project.

After the first editing will be done, we can post it on different social networks and propose to filmmakers around the world to create their own scenes in order to make some extension of this interactive movie.

To join the group you can contact us here: contact@fsofrance.org