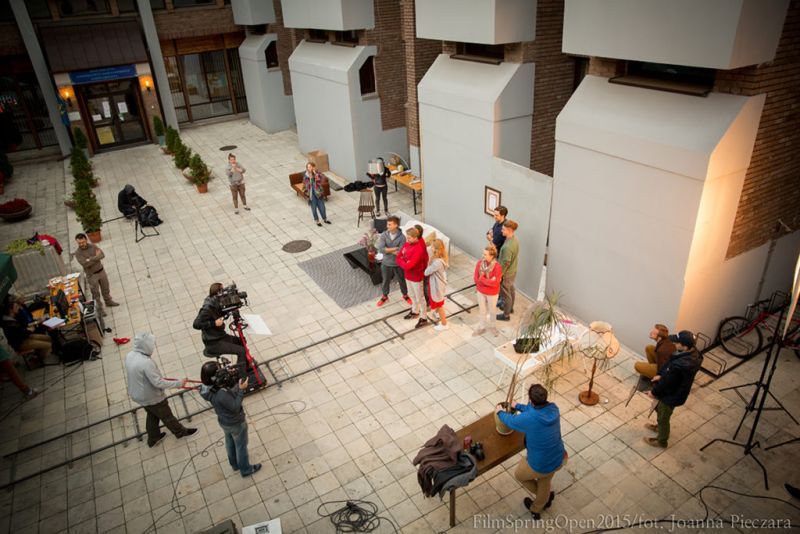 Filmmakers and artists at the Zakopane Festival of Films about Art. Promotion of the New Model of Film Production.

Film Spring Open has always been a meeting point for skilled professionals and artists, for technicians and film magicians. One of the main ideas behind its educational programme is the interdisciplinary exchange of knowledge and experience. Also, at Film Spring Open we believe that to enrich such a complex creation like a film, there is much more needed than skills and knowledge of a film director alone.

Filmmaking is a team work; this is a compilation of many visions which are very often evolving during the process of production itself, constituting the final picture, and yet still open to so many interpretations and countless visions of viewers.

There are not many pieces of art as complex as film regarding the process of creation. But what happens when the the film is about the art? How to create art on the subject of art? How does the artist look at the other artist?

Some of these questions may be answered starting from tomorrow, during the Zakopane Festival of Films about Art, April 11-15, which after a 20-year break returns in this shape to the cultural map of the most famous Polish mountain resort.[i]

The Zakopane Festival is an event of a long and rich history. The first edition took place in 1968 during an artistic event “2. Salon February 68 “, which was devoted to Polish graphics design and “3. Salon March 68 “, where nine outstanding Polish painters exhibited their works, including Brzozowski, Gierowski, Nowosielski and Stajuda. The initiators of the Festival were Grzegorz Dubowski and Władysław Hasior.

This year’s edition will return to the traditional competition formula and the jury led by Prof. Slawomir Idziak, the founder of the Film Spring Open Foundation, will select the best three from the films submitted for the competition. Also, there will be presentation of selected artists who showed their works during the first editions of the March Salons.

Both events will be part of a bigger project “Spring of Culture” whose name says it all.

The organizers of the Festival hope to re-initiate a series of meetings and exchanges of artistic thought between artists and filmmakers at the foot of the Tatra Mountains. This is also one of the guiding ideas of Film Spring Workshop.

At the annual Workshop organized by the Film Spring Open Foundation the artistic and film community have been already cooperating together for 13 years. Participants can work on their film projects with the support of tutors in the creative group of their choice: VR, Interactive Narration, Script Writing, Film Previses, New Production Model, CGI and Modern Editing, Commercial and Promo Films, Music Videos, Game Jam, Documentaries, Web Filmmakers Group. They can also participate in workshops and lectures from award-winning top professionals, film screenings and meetings with film directors, one-to-one tutorials and tests of new technologies. This year’s edition takes place between 17-26 of October.

Interdisciplinary exchange and cooperation between various audio-visual professions are some of the aspects explored also by the new Model of Film Production, which is introduced by the Film Spring Open Foundation. Therefore, the Zakopane Festival is an ideal place to promote informally and discuss the model and its practical implementation.

We are sure that discussions and presentations of the new Model of Production within such environment will result in revolutionary ideas and changes in the way the films are being produced today.

[i] Zakopane has became a Polish cultural center in the 19th century. In the years 1890-1918 Podhale took over the imagination of many Polish artists. The first spa qualities of the region were discovered by the Warsaw doctor Tytus Chałubiński, and soon painters, writers and composers followed the trend and went to Zakopane. Stanisław Witkiewicz, who lived there in 1890, contributed to the popularity of the region. The atmosphere under the Mount Giewont was perceived as a booster of creativity and free exchange of ideas.

At the beginning of the 20th century in the cultural center of Zakopane, in the Morskie Oko hotel , the Zakopane bohemia was gathering. From 1904, a professional seasonal theater had its headquarters there (and in the interwar period, the theater organized by Witkacy). On the stage at Morskie Oko outstanding actors and actresses performed, including Helena Modrzejewska, Hanka Ordonówna and Aleksander Zelwerowicz.