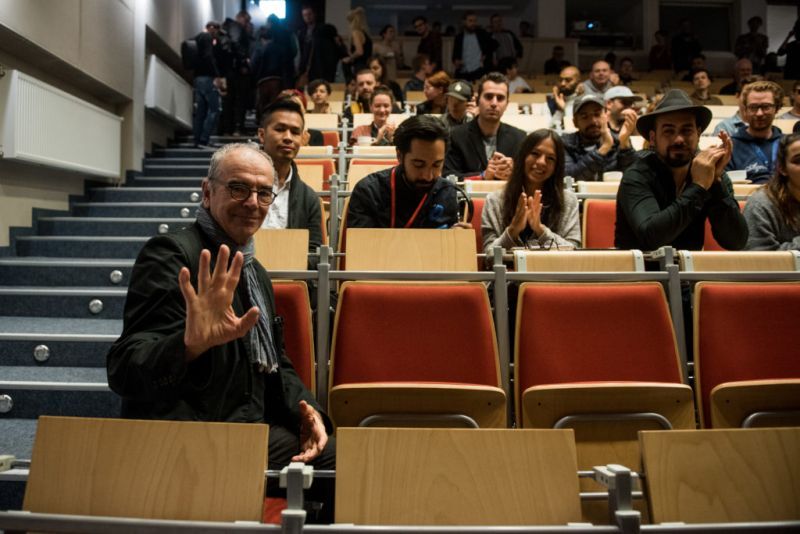 „Every new beginning comes from some other beginning’s end”!  The 15th edition of Film Spring Open will be held online on 13-22 October 2020.

The pandemic has forced us to go virtual and so the jubilee 15th edition of the Film Spring Open workshops will be organised online. The circumstances actually only accelerated the implementation of technological solutions which we had been consistently developing for many years – www.filmspringopenonline.eu

And how will this “new” event look like? That’s up to you – young audiovisual artists. Together, we will show how a new vision of AV production emerges from the chaos of the pandemic. New formats, new technological solutions, and new green and economical production.

As in the previous years, during the workshops you will be able to put your experimental ideas into action, without the risk of a negative feedback. You will learn about new solutions in 19 dedicated FSO groups. Thanks to our partner PZU SA, we have announced a competition for an advertising campaign promoting a healthy lifestyle, entitled: Mind your health at any cost, for when you die, your life is lost.

Projects responding to this topic will be developed in four dedicated groups:

Jagoda Szelc will for the second time host the Film Scriptwriting Group, whose members have been selected based on the submitted film treatments. Thanks to the support of PZU Foundation, we invite you to participate in the New Green Model Production Group, which will be assisted by the prominent film producer Ewa Puszczyńska and by Sławomir Idziak. The Internet Creators Group will be led by the famous blogger Konrad Kruczkowski.

Young filmmakers are also invited to work in the groups focused on the work with equipment and software solutions:

– Arri Crime Movies Group has its second edition this year; during the last FSO it was extremely popular among the participants. Paweł Dyllus, a brilliant cinematographer, will act again as the group leader.

– Canon Documentary Group will be supervised by two film directors, Eliza Kubarska and Paweł Łoziński, and Robert Woźniak from Canon Poland will be the group’s adviser on issues related to technology and equipment.

– Sony, Shooting in Rough Conditions Group will be led by two young cinematographers, Beata Rakoczy and Adam Szulc, who are former FSO participants. We highly recommend joining this group if you want to hear about their experiences while shooting the recent Netflix series The Woods.

Konrad Ziaja will take us into the world of new 360 technologies in the Virtual and Augmented Reality Group. The CGI and Modern Editing Group will be hosted by Jacek Skrobisz, an experienced VFX supervisor, who has worked on thousands of commercials and dozens of feature films and series.

The group for Projects Shot in the Virtual Set deserves special mention: under the supervision of Daniel Zduńczyk, participants will be able to create their projects in a specially designed digital film set of a hospital. Thanks to this technological solution, we can shoot a film online – welcome to the future!

The Nature Film Group will get support from Krzysztof Kubik, awarded in this field with two BAFTA New Talent Awards.

Supervised by Florent Pallares, the Interactive Narration Group this year will develop an international project called Super Tramp, with participants from Mexico, France, Poland and other countries.

The Film Music Group will be an open platform for music composers and all AV creators who enrich their projects with a sound layer. The group will be supported by Magdalena Miśka-Jackowska, a journalist, presenter and lecturer, and Michał Woźniak, a film composer.

Agata Nawrocka will be the leader for the NUKE – the Art of VFX Group, whose participants will have the chance to win a prize founded by the Foundry, producer of the NUKE software. The author of the best project will win a yearly subscription!

If our planet could think, it would surely get rid of us – and if we do not want this to happen, we have to change our approach to film production. Just one feature film contributes to emission of about 73 tons of CO2 into the environment, which is as much as ten family houses in a year! That is why a new, sustainable and green model of film production will be the leading topic for our lectures.

The event will be held in cooperation with the Krakow Festival Office. The speakers include Jagoda Szelc, Monika Gławacka (Łódź Film Commission), Sławomir Idziak, Florent Faget and Vincent Theven of French Solar Engineers, and Tomasz Wełna.

Ewa Puszczyńska, producer of Ida and Cold War, will also talk about new production solutions, nudging the newcomers in the right directions and encouraging them to adapt to new, sustainable work conditions of filmmaking.

We will listen to a conversation between a son and a father: Mikołaj Pokromski (producer) and our special guest, Waldemar Pokromski, a renowned make-up artists for films by Steven Spielberg, Terrence Malick, Michael Haneke, Andrzej Wajda and Krzysztof Zanussi.

Piotr Dumała will talk about his work as a film director and great creator of animated and experimental films,

Peter Eszenyi, a VFX supervisor, will introduce us to his works created with the help of the Cinema4D software

We will listen to Łukasz Kośmicki, creator of The Coldest Game, as he reminisces about his journey from a cinematographer, to a screen writer and, finally, a film director. Together with the film director Magnus von Horn, we will discuss the meaning of a cat and a dog in a film. Mangus will share his experience of working on Sweat.

We also invite you to a meeting with Paweł Łoziński, a documentary film director.

We will also discuss the subject of mountaineering documentaries with Eliza Kubarska, a film director and producer.

Paweł Dyllus, DoP, will tell us about his struggles on the film set and his idea of the golden rule for creating without losing yourself and going crazy.

Piotr Szczepanowicz, a creator and producer of animated films, will share his experience of gained in many productions, including Kill It And Leave This Town directed by Mariusz Wilczyński.

We will get the chance to immerse into the imaginary world of SFX creators, Wanda Kędzierzawska and Marcin Kędzierzawski.

The amazing MB12 MiniBird VertiCrane, with special vertical movement capabilities, will have its premiere at this year’s FSO. Max Pawlikowski of Cinelight will show us some new possibilities of cinematic lighting.

Paweł Flis will talk about his experiences as the director of photography on the set of Netflix’s The Woods.

Jacek Santorski will hold a lecture about psychology of the creative process in the difficult times of a pandemic.

We will be able to test the abilities of the Sony Venice dual ISO camera during a workshop devoted to shooting in rough conditions, led by Adam Suzin, cameraman for The Woods. Mateusz Kuźniak, a master of cinematic lighting, will teach us about his techniques.

What music can do for a film? Magda Miśka-Jackowska and Michał Woźniak will introduce us to different levels of a film puzzle.

We will also hear from Marcin Ziębiński, a director of advertising and feature films, who will talk about the world of TV series.

Kuba Sobek will discuss his work with CGI and production of commercials, games and cinematic trailers. Konrad Ziaja will invite us to the VR world.

Thanks to Creativetools.pl, a three-day workshop in colour correction is planned with an experienced colourist, Piotr Sterczewski.

The Krakow-based company Egomedia will show its virtual studio and invite us to create commercial spots in a virtual environment.

Adam Strzelecki and Maciej Janicki will teach us how to create stock photos.

We will also present our Prototype Innovative Mobile Virtual Film Studio, an economical solution for a virtual studio based on rear projection. The project has been co-financed by the Ministry of Culture and National Heritage from the Culture Promotion Funds, obtained from subsidies in games covered by the state monopoly in accordance with Art. 80 (1) of the Gambling Act of 19 November 2009.

Join us and have some fun! Last year we had a lot of fun in Przegorzały, filming to the rhythm of Ravel’s music: https://www.youtube.com/watch?v=iKDGadjnJvw. This year we invite you to send your best shots and relations of your online participation in the FSO. Maybe you will be able to shoot in the hospital that we created for the virtual film set? Each room may serve as a set for a different plot: www.virtualmagic.com.pl/VR_SZPITAL_FSO_V1.3.zip. The current situation will surely be an inspiration.

After the FSO we will combine your footage into a joint film project.

In the evenings we will hear two bands, Babsztyl and Remek O, who will play in a virtual set. A special guest, Grzech Piotrowski, will visit us to talk about how to create together in the times of a pandemic.

You are invited to visit our internet café, where you will be able to meet other participants and table hosts, our social butterflies. As every year, Marty Demmer will attend the FSO for long hours of discussions about VR. Andrzej “Stasiu” Szypulski has decided to turn these meetings into a documentary. Another guest, Daniel Mayo Kucharski, is an expert in the area of advertising and YouTube.

We can already guarantee that this year’s FSO will be an exciting, albeit different, virtual event. We will show the most interesting activities live in our broadcast window, as well as the entire backstage process. We can’t wait to see you!